Happy Hannukah! Tonight we are celebrating with a true jewish feast: latkes! These Crispy Potato Pastrami Latkes are a step up from the traditional potato latke and oh my are they delicious!! Crispy shreds of potatoes reminiscent of hash browns that we fry until golden!  Serve with a sweet and sour dipping sauce for the perfect finish.

For the first night of Hannukah we made Kosher Krispie Kreme Copycat Donuts…and sent a box with hubby off to base. He is serving in the army reserves for the Israel Defense Forces and asked that I make some donuts for the soldiers on base! He’s a cutie.

Tonight we are frying up these hearty latkes and getting out the colorful chocolate gelt! The addition of pastrami to these latkes makes them more of “real food”, and brings up the flavor level. Paired with white pepper in the seasonings and a delicious dipping sauce they are the perfect fun family dinner for the holiday.

I know these are called pastrami latkes but you can use whichever deli meat you like the most! I have tried them with smoked shoulder and it was so delicious! Just make sure to choose a meat that isn’t raw, as these are not being cooked for very long.

While the oldie goldie sauces for latkes are applesauce and sour cream(huge debate there), today we are trying something new. New and improved! While I still love applesauce for a good ol’ latke, this sweet and sour sauce is really perfect for these meat pancakes.

My kids also loveeeee dipping food/things and if you want to make these on a big platter feel free to add a couple of their favorite sauces in there as well!

For this barbecue style sauce you will need a couple simple ingredients. Just mix and microwave for one minute to heat the sugar and serve!

1.SQUEEZE WATER FROM POTATOES. dry potatoes equal crispy latke! if you dont have a cheesecloth for this step you can use an old clean dish towel. I wouldn’t ruin a new one but this works great!

2.MAKE SURE OIL IS HOT. Before adding the latkes to fry, make sure the oil is nice and hot. This will prevent them from sticking to the pan and also make sure they get as crispy as possible! To check your oil you can place the end of a wooden spatula into it and see if little bubbles form around the wood-if they do you know it’s hot enough to fry! 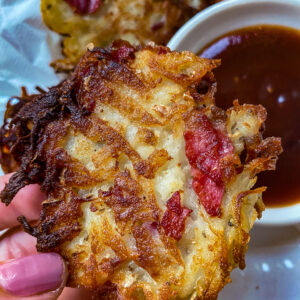